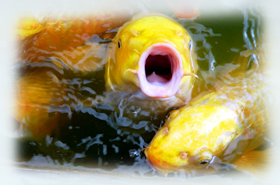 The use of UV water treatment systems in fish farms and hatcheries has lead to the production of healthier and larger fish as well as the possibility of an increase in stock densities without the increased risk of disease.
Water treatment UV systems do not change the physical characteristics of the treated water so water disinfection occurs with no undesirable side effects such as toxic by-products, pH changes or temperature fluctuations.

How Does Ultraviolet Disinfection Work?

Ultraviolet energy causes permanent inactivation of micro-organisms by disrupting its DNA so that they are no longer able to maintain metabolism or reproduce. All bacteria, spores, viruses and protozoa (including Cryptosporidium and Giardia oocysts are permanently inactivated by UV). The maximum effectiveness occurs at between 240nm and 280nm. The Hanovia UV systems produce these wavelengths in abundance.

The Mechanism of Ultraviolet Disinfection

Strong sunlight disinfects water by permanently de-activating bacteria, spores, moulds and viruses. Over a century ago, scientists identified the part of the electromagnetic spectrum responsible for this well-known effect; wavelengths between 200nm and 300nm, often called UV-C. The most effective single wavelength is typically UV at 265nm, however recent research in the USA has shown that 271nm light and 263nm light are the most effective UV wavelengths for the deactivation of particular target organisms.

The mechanism of kill is well documented and unlike chemical disinfectants the organism is unable to develop any immune mechanisms. The mechanism of kill involves the absorption of photons of UV energy by the DNA, which fuses the DNA and prevents replication. DNA (Deoxyribonucleic acid) consists of a linear chain of nitrogen bases known as purines (adenine and guanine) and pyrimidines (thymine and cytosine). These compounds are linked along the chain by sugar-phosphate components. The DNA of most forms of life is double stranded and complimentary; the adenine in one strand is always opposite thymine in the other, and linked by a hydrogen bond, and guanine is always paired with cytosine by a hydrogen bond. The purine and pyrimidine combinations are called base pairs. When ultraviolet light of a germicidal wavelength is absorbed by the pyrimidine bases (usually thymine) the hydrogen bond is ruptured. The dimer that is formed links the two bases together, and this disruption in the DNA chain means that when the cell undergoes mitosis (cell division) the DNA is not able to replicate. The most effective wavelengths to achieve this effect are found between 263nm to 275nm, and the peak wavelength distribution is dependent on the target organism.

The optimal operating temperature is 15oC, and the lamp output will fall off rapidly as the lamp temperature migrates from this condition. These lamps should not be used if the water is hot or cold, or if the water flow is intermittent as the temperature build up will cause the lamp output to decrease. Frequent switching of these lamps will have a detrimental effect on lamp life, and the most probable failure mode will be failure of the filaments, which become brittle. The article "The dying of the light" describes the variable output of these mass produced lamps and offers some suggestions as to how the performance might be optimised. Typically these lamps have an efficiency of 25-30%, which is temperature dependent. The lamp life is typically 8000 hours, and the lamps have the advantage of being mass produced and easily second sourced.

Amalgam lamps have been developed recently to overcome the problems associated with traditional low-pressure technology. This type of lamp contains a mercury amalgam, and typically up to 120mg of mercury is contained in each lamp. The Amalgam lamp is typically very long, and not unusually can be more than 1.5 m (5 feet) in length. Once switched on, the Amalgam lamp output is not effected by water temperature fluctuations, however the large size of the lamp does mean that they can take up to 800 seconds to get to full power, and the warm up time is temperature dependant, as the successive strikes below illustrate.

Research is now being undertaken to verify the effect that shorter wavelength ultraviolet  light has on the other cell membrane of the organism. This shorter wavelength is more energetic and is absorbed by the organisms outer membrane. A lethal insult is effected, which means that the cell is unable to effectively regulate osmotic pressure. This effect coupled with the fusing of the DNA means that UV is a simple, elegant disinfectant and one that will increasingly replace the more traditional chemical techniques.

The Production of Ultraviolet Light

Ultraviolet light is most typically generated from a low pressure or a medium pressure lamp. These lamp types are different in character and performance, and are described below:

Low Pressure ultraviolet lamps are the most common lamp type and are the oldest source of ultraviolet light. The consist of a quartz envelope that separates two tungsten filaments. The lamp is evacuated to <10torr and approximately 60mg of mercury is introduced into the quartz envelope. The spectral output of this lamp type is monochromatic, a single line output at 253.7nm. A fluorescent lamp is a low-pressure lamp that has the inner surface of the lamp coated with phosphors to absorb all of the 253.7nm light, and only emit the longer wave visible light. This lamp type is typically 1 meter (3 feet) in length. This lamp has an output that is temperature dependent and can take up to 400 seconds to get to full output in cool or hot water.

The medium pressure ultraviolet lamp that is built by Hanovia is designed to have a spectral output that is specifically enhanced in the germicidal region. These lamp types are often called polychromatic, as they have a continuous output from 200nm up to the long wave visible light. Medium pressure lamps have a deeper vacuum produced within the quartz envelope (typically 1000 torr) and a 3.5Kw lamp will contain approximately 300mg of mercury. The Hanovia lamps have an efficiency of between 15% to 20%, depending on lamp type, and typically 15 low pressure lamps or 6 amalgam lamps will have a comparable output. The medium pressure lamp is hot running and typically the lamp surface will reach 800oC, however the protective sleeve that separates the lamp from the fluid being treated will not usually rise above 60oC. An over temperature detector will power down the lamp should the water flow stop for an extended period. Medium pressure lamps are typically from 20cm to 1.5M in length and a variety of quartz types are selected depending on the required spectral output; pure fused silica is used for disinfection, dopants are introduced to enhance particular spectral regions, or to inhibit ultraviolet wavelengths which at extremely high ultraviolet doses could have detrimental effects.

The Hanovia ultraviolet lamps are built at the Slough factory in a clean room environment. Every lamp is individually tested before despatch, and each batch is 100% documented to ensure that in the unlikely event of a lamp failure, every lamp made in the suspect batch can be traced. Hanovia manufactures in excess of 12,000 lamps per annum. Each lamp is individually numbered and any lamp failure is investigated and a failure mode analysis report generated.

Ultraviolet Technology in Use

Ultraviolet technology is now applied by a broad range of operators from municipal effluent to ultrapure rinse water, and from viscous high brix sugar syrups to air. The technique has been successfully extended to disinfect packaging materials prior to filling, and new developments have included the use of UV to deodorise nuisance smells from industrial or municipal dischargers. Ultraviolet is also applied to drinking water to assist in the destruction of pesticides or other contaminants that have entered the aquifer, such as NDMA or MTBE. In each case, the ability of a monitoring system to measure the fluence being emitted by the lamp allows the operators to have confidence in the integrity of the system. Hanovia systems are designed to be fail safe and the control protocols that are used will not allow untreated water of effluent to be sent forward. The dedicated ultraviolet monitor measures the output from each lamp. The monitors are sealed and do not allow any operator adjustment. The Hanovia ultraviolet monitor measures intensity in absolute units of mw/cm2. An online transmittance monitor measures the transmittance of the fluid being treated, and not unusually surface water can have a very high fluctuation in transmittance. Use is made of data logging facilities to demonstrate the adequacy of treatment, and to provide a permanent record of disinfection. This transparency is often required by a regulator or by those further up the supply chain to demonstrate that the water used to make product or water used as a part of the manufacturing process in wholesome.