A serious waterborne outbreak of giardiasis1 occurred in the Norwegian city of Bergen resulting in over 1,000 people becoming ill. Water sampling, which was carried out after the outbreak was detected, revealed Giardia lamblia cysts in treated water at concentrations of up to 5 cysts per 10 litres.

In the Fall of 2004, a serious waterborne outbreak of giardiasis1 occurred in the Norwegian city of Bergen resulting in over 1,000 people becoming ill. The outbreak began in August with case numbers gradually increasing over several weeks; however, public health investigators did not identify the water supply as the probable source until early November. Water sampling, which was carried out after the outbreak was detected, revealed Giardia lamblia cysts in treated water at concentrations of up to 5 cysts per 10 liters, however their viability was unknown.

Bergen, situated on the west coast, is Norway's second largest city with a population of about 250,000. The water supply in question serves about 60,000 people in the center of the city. The water is drawn from Lake Svartediket and, until the outbreak, was treated by chlorination but not filtered. Norway has a number of similar high quality surface water supplies that are used without filtration, although most serve smaller populations than the supply in Bergen. The outbreak may have been triggered by heavy rainfall, with 120 mm of rain recorded in the 2-week period before the giardiasis case numbers began to rise. Heavy rain then continued over several weeks. Levels of coliform bacteria in the raw water also peaked just after the initial rain event. A possible source of contamination was sewage from homes and restaurants overlooking the lake.
Giardia lamblia, the species of Giardia infectious to humans, is a parasite found widely in sewage and surface water supplies. Infections are transmitted by tiny egg-like cells called cysts. Chlorination is able to provide some degree of disinfection against Giardia cysts (up to 1.5 to 2 log removal); however, in countries such as Norway, very cold water temperatures in the winter makes this difficult to achieve. Norway draws almost all of its drinking water from surface water sources. A survey of raw water sources in 1998 and 1999 found 9% of samples contained Giardia cysts and 2.5% contained both Giardia and Cryptosporidium cysts (Promed-mail 2004).
Ultraviolet (UV) is widely used around the world to inactivate harmful pathogens, including Giardia and Cryptosporidium cysts, from drinking water and wastewater. Recent advances in UV technology mean it can also be used to reduce pesticides and other non-organic contaminants from ground water. It is a completely clean technology that does not rely on the use of chemicals and leaves no unwanted residues or by-products. A new water treatment plant with filtration and UV disinfection had already been commissioned for the affected water supply before the outbreak occurred. The proposed installation date was 2007, but following the outbreak it was decided that the filtration and Berson UV systems should be installed as quickly as possible by adapting the existing facility.
Following a tender process, Netherlands-based Berson UV-techniek was chosen to supply the equipment through its local distributor HOH Birger Christensen. Berson's new InLine+ medium pressure UV systems were chosen for their compact design and small footprint  an important consideration, as it meant they could be accommodated in the existing water works plant without major modifications to the existing building. The order was placed in December 2004 and Berson supplied four large InLine+ UV units, which together have the capacity to treat approximately 3,000 m3/h (19 mgd) of water. Two InLine+ plus systems are fitted in series to each of two 60 cm diameter pipelines (see Figure 1). The Berson UV systems were fully installed and commissioned in February, 2005, just two months from the initial order, and have been fully operational since then. The units are designed according to the German DVGW standard (DVGW 2003) (based on a minimum UV dose of 400 J m2).
The Berson UV systems are linked to a central process control unit by UVtronic+ controllers. These automatically control UV dose by monitoring water volume and water transmittance, ensuring optimum UV output at all times. The UV dose for each of the two lines is displayed on the central control unit's instrument panel. The UVtronic+ controllers ensure the UV systems are always providing an effective level of disinfection at the lowest possible running cost.
The UV systems are also fitted with automatic wipers. These move up and down the quartz sleeves (which cover the UV lamps) once an hour, keeping them free from mineral deposits and ensuring optimum UV output at all times.
Since the Berson UV systems were installed to treat Bergen's water supply, they have been running constantly with no shut-downs. The systems' performance have been regularly monitored, with water sampling and analyzing by the local health authorities. No evidence of viable Giardia lamblia has been found since switching to Berson UV. In addition, the chlorine dose has been reduced to just a residual amount to prevent re-infection of the water once it leaves the water works.

DVGW2003, W294-2 Draft Standard  UV Disinfection Devices for Drinking Water Supplies, testing of functions and disinfection performance.
Promed-mail 2004 news item: Giardia, water supply - Norway (Bergen)
1 Giardiasis is a diarrhoeal disease caused by a single-celled, water-borne parasite, Giardia lamblia. After infection the parasite lives in the intestine. It can survive outside the body in the environment as a cyst for long periods.

About Berson UV
Berson UV-techniek is an ultraviolet (UV) manufacturing company based in the Netherlands and with a worldwide distribution network. Berson develops and manufactures disinfection systems for fluids and surfaces, based on advanced ultraviolet (UV) light technology. Applications are found in various industries: food, soft drinks, drinking-water, hospitals, pharmacy, cosmetics, electronics, chemical industry and for coolant and process-water, waste-water purification and contamination control in brine baths and fish farms. Berson is a part of the Water Technology division of Halma plc. In conjunction with affiliated Halma plc companies Hanovia (UK) and Aquionics (U.S.A.), Berson is a leader in UV disinfection and offers over 85 years experience in the manufacture, application, and development of UV equipment supplied to all corners of the globe.www.bersonuv.com 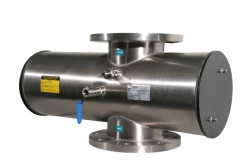